Do you watch action movies? … If yes so today’s article is going to be lottery for u but the people who chase cinemas for unique and fresh stories so my friend don’t waste your time this article is not for you at all.

Dhanush is the one man army. The actor who hides the difference between reality vs fiction by his acting. First ‘Asuran’ after that ‘Karnan’ are the top content driven movies of Indian cinema but now it’s time for mass and to continue CDs dhanush is come back with action movie treat. Welcome to our today’s movie ‘Jagame Thandiram’. Firstly listen a good news you can watch this movie in hindi dubbing as well instead of watching it in original tamil. Now, tention is over of subtitle but if you want to feel like raw so go for tamil only.

Gangster! … speak truth that when you hear this word you imagine a hollywood movie scence like ‘GodFather’, don’t you? But my friend it will change now our india will be ahead of Hollywood. How? … The Answer is only in one word ‘Suruli’ meet this person the most dangerous man alive for the sack of saying he is just a gangster but he doesn’t take 0.1 sec to kill a person. The life goal of suruli is simple and easy earn money, build a small house then marry after that wait for the death.

Now there are only two ways to fulfill our dreams. First is long means wait and second is shortcut guarantee of getting successful. For suruli time is money so he follows the second way that is shortcut. He travelled from Tamil Nadu to London. 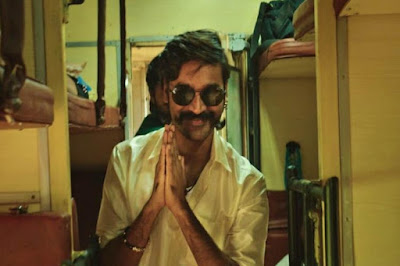 In London the story is different battle war is going on. The leader of gang one is Peter. He wants to clean up the brown people from london. Either legally by the government rule or illegally by a gun. Peter’s mission is clear that ‘make london free from foreigner brown people’. The second gang leader is Sivadoss. He doesn’t call himself a gangster but a hero. Whenever any person who lives in London, gets in trouble call his name. Enemity against each  other because in the gun smuggling sivadoss is ahead of peter so that’s the reason behind behind their battle in London but the story took a twist when our desi surili changes the battle royale in love triangle. 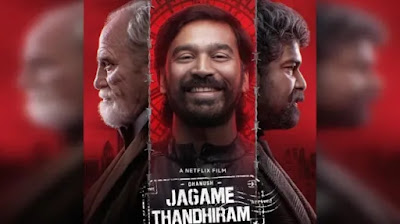 Again there are two choices for suruli. First either he fights for his people who are spending their life critically here because of their skin color or second option is to join peter then he will have a lot of money and will have a chance to spend their life as he wanted in London. From these three things money / loyalty / violence which thing suruli is  going to choose. I am not gonna let you know the answer at all. Go to netflix you will get to know everything scene by scene. At this moment, the most important question is shall we watch this movie or not? … I told you the answer of this question at the beginning of the article this is not dhanush content movie this is just a tribute for classic action hollywood gangster movies by director Karthik Subbaraj.

Do you the biggest x factor? … This movie has a unique style to represent someone’s death as a festival. On the screen everywhere is battle war going on everyone has a gun and they are shooting on each other and behind it a music is playing like here is a celebration. Second interested things is that this movie doesn’t depend on only fighting it has emotions too. The social message which connect human to human. Everyone has a right to live no matter what skin color they have. Third interested thing is the climax of this movie is amazing. ‘Tit For Tat’ this line exactly fits on the last scene twist of this movie. ‘Life is more painful than death’ whoever has already watched this movie they definitely have got my point.

Now come to the problems:

1) The story line Is easily predictable. We earlier get to know in which direction movie is going and what the finally will be of this movie … No surprises.

2) The duration of this movie is very long 2hr 30m. it is very stretched. It’s web series era. Audience wants more than two three movies enjoyment in 1hr episode but here the screen play goes like a turtle and think when we already know that what the next scene will be so feel like time wasting is normal. 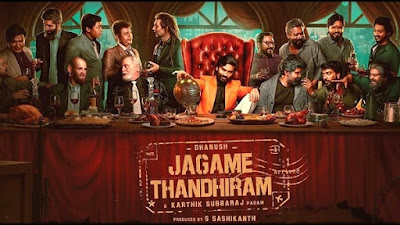 If I talk about dhanush so according to me this person will definitely make the Indian cinema popular. It doesn’t sound that he only acts in movies. It likes he is living the character.  The same thing happens to Jagame Thandhiram. After watching the movie you can’t imagine any other actor besides Dhanush as a Surili.

So, If you are interested in watching amazing hollywood style action / thriller movie so watch it but if you want to watch an unique movie which satisfy mind’s creativity and after watching it you remember it so it’s not for u.

I give 5 out of 3 stars to Jagame Thandhiram. First star is for the combination of action and music to represent the death as a festival. Second star is for highlighting the global issue and keep emotions in it instead of focusing on battle royale. Last star is for dhanush to give a amazing powerpack one man army performance. Watching him on screen is not less than a treat.

If I talk about negatives so I don’t give one star because of it’s worst gangster storyline no surprises and easily predictable. Another start is for stretching this story from 1hr to 2hr 30m without any turn or twist. 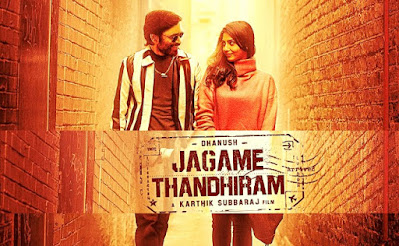