The Conjuring (2021): The Devil Made Me Do It Movie Full Review:

Hey, I’m Hammad. Today i’m gonna explain a movie named The Conjuring – The Devil Made Me Do It which is recently released on HBO Max. So let’s get started… The Conjuring: The Devil Made Me Do Itis the “first film” in the franchise to not be directed by James Wan. This one’s directed by Michael Chaves who last made “the curse of la llorona” just like the previous two conjuring films.

This movie takes a real case file from Ed Warrenand Lorraine Warren played by Patrick Wilsonand Vera Farmiga and takes a based on a true story approach to it of course with all the trappings of a horror film. This one being the very famous the devil made me do it case which was the first time that someone who was on trial for murder pleaded not guilty by means of “demonic possession”.

This film follows Ed and Lorraine Warren as they encounter the entity that may or may not have been responsible for the murder. I love the conjuring movies the first two are great. I saw an article recently that called the conjuring films “the fast food of horror cinema”. If that’s the case let me have a triple goddamn quarter pounder of the conjuring movies because I like to see in the theater. 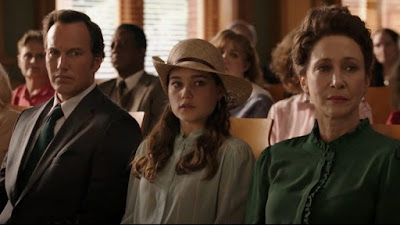 If a movie is good, it’s good i don’t care what audience it’s aimed at i don’t care if it’s high concept horror or elevated horror which is a term, I’m not a huge fan of i just love it all. When it comes to the conjuring 3 there’s a lot to like Patrick Wilson and Vera Farmiga being the utmost of all of those things.

They’re fantastic as always, they’re the reason i like these movies i mean obviously James Wan in his first two films, he’s so talented and his scares are so well done and he did such a great job with those first two films no doubt but it’s really the human story behind the warrens and the way those characters are incorporated throughout each one of these films that makes them all very entertaining for me.

I have said this before but it’s like a great TV show when you have characters that you really care about you’re going to probably enjoy even some of the lesser episodes just because you love the characters and you want to know what they’re going to do. You want to go on that journey with them and when it comes to the conjuring 3 it is the lesser of the trilogy it’s the weakest i think. It’s not a gargantuan step down it’s just that you can feel that it’s not quite as refined as the first two.

James Wan is a master behind the camera at this point, he’s done everything and he’s done it all well. He is made gritty action with death sentence obviously tons of great horror and he somehow made aquaman work as a feature. He’s a great masterful filmmaker as far as I’m concerned but Michael Chaves is also a very good director. 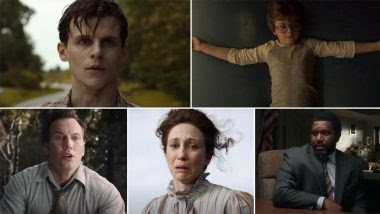 This film is much better than “la llorona” it has a lot of really well-crafted scares. It’s a gorgeous looking movie everyone is very good in it. The performances are strong at first rate and there are some very good sustained sequences of tension.

It’s just that the story isn’t quite as good as the first two part of that is because it feels like these movies all kind of have to relate to some sort of horrific case that we’ve heard of before and in so doing its sort of trapped in that and they can’t really get out of that. Obviously, we have all heard of the devil made me do it case if you’ve ever researched the paranormal or anything like that on the internet. I’m sure you have heard of it and so this film obviously explores that but they can’t make an entire film about just one incident that’s very “horrific”.

Sometimes the story feels like it’s being held back by the fact that they have to make it about a certain case but the case itself is only slightly interesting in one specific way and they have to also fill the movie with other things and so sometimes they get away from the devil made me do it case and kind of build their own mythology around it.

Honestly, I really enjoyed it one good thing they did throughout the movie with the characters was that from pretty much the opening scene Patrick Wilson’s character Ed Warren has a heart attack and throughout the entire film this health issue that he’s dealing with is a constant source of tension. The stakes are always high for him even a brisk jog through the woods could end up in the hospital and so that’s a lot to be dealing with demon and so they also did a good job with the stakes for lorraine because she’s feeling a connection with this entity and the entity may or may not be forcing her or the people around her even her loved ones to do things that they don’t want to do.

So, the film has a lot of opportunities to take the characters in different directions and make them do shocking things to one another that they normally would never have done. It’s also just very well paced there’s rarely a boring scene even when you can kind of tell that it’s not necessarily as interesting or as compelling as the first two. It’s never boring it’s always investing and I cared about what was going on.

There’s also a great supporting turn from the actor John Noble a lot of these kinds of movies have an expert that you visit and they have some sort of knowledge about something that the lead characters need to know about he plays that character but it’s a little deeper than that and he gets a lot of opportunities to really flex his chops. He’s damn good in the movie and extremely creepy.

The film isn’t quite as scary as the first two but there are a few sequences that really stand out to me one in a morgue. There’s a wonderful underground tunnel sequence that I think is really strong for the most part though it’s the least scary of the three there’s a slight over reliance on the typical build up to a jump scare. You know something’s coming you’re waiting for it to come and then it does and you’re sort of released the tension’s gone now from the moment and that’s something all these movies do and James Juan is particularly great at it because none of his scares are false and he has a good way of subverting your expectations for what you expect the scare to be and then saying actually no it’s over here this film does that a few times just not as well as Juan does. 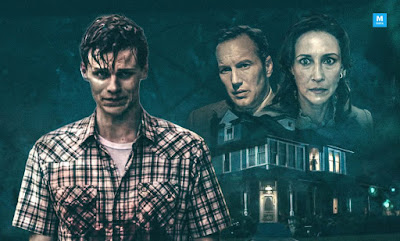 It’s impossible to not think about that while you’re watching it nevertheless these movies, I get excited about all of them. I was really excited to watch this and it was good. I really did have a good time with it and most of it is because of those characters Patrick Wilson and Vera Farmiga are excellent as these roles and just like a great TV show.

I will watch these characters do things even when the episodes aren’t as good as some of the others. I’m gonna give the conjuring the devil made me do it a ‘b’ it’s gonna be in theaters and “HBO Max” very soon so please do check it out. I think it’s worth your time especially if you’re a horror fan but just go in knowing it’s probably not as good as the other two but certainly not a bad film.