Hey, I’m Hammad today I’m going to review and explain the ending scene of a movie named Kingdom Ashin of The North which is released on “Netflix”. So, let’s begin… Kingdom is a series that I have absolutely loved and season two of the Netflix show ended with our group of heroes encountering a brand-new character as they tried to get to the bottom of who was the brains behind the zombie outbreak. Whilst, we were all expecting the third season the creators of kingdom decided to do a breakneck twist and release a prequel movie that discusses the origins of Ashin. 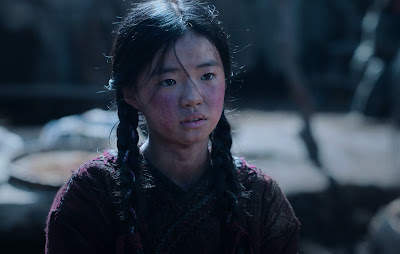 The special episode sets up Ashin, a peasant villager who lived with her mother and father, the latter of whom was Egyptian, these were a group of people who belonged to one of China’s final dynasties before the Mongol conquest. In the century briar, the king had given the churches, a piece of land and he and his family settled in Joseon and built a home there because the land did not truly belong to them. The native Georgian people viewed them as a low-born peasant class and thus they had forced them to remain in the village doing menial jobs.
The land itself was also highly sought after and in the film, we also meet the Pajeowi, an army of which had gathered their people at the basin of the Pajero river. Due to rising tensions, Joseon recruited several churches including Ashin’s father who would be used to spy on the activities of the Pajeowi. He expected that this would improve his people’s standing and their lives but unluckily things don’t happen that way.
Now, While all this is going on some pajeowi men enter a forest in order to illegally collect a herb called ginseng which will help with their harvest. They’re murdered and their deaths are attributed to a wild zombified tiger, though it’s revealed that this was actually a cover-up and that it was carried out by the choklan. Ashin’s father was then framed and set up to make it look like, he betrayed his own people which leads to the pajeowi turning their hate towards the churchians instead of the Joseons. The pajeowi leader Adigan seeks revenge and they launch an attack and murder everyone in the village except for ashen’s father. He’s taken hostage and at this point, i am kind of glossing over the amazing tiger fight, well, we will rather tiger chase as there’s a lot of territorial things to discuss but yeah, the action scenes don’t slack. Now, the tiger is actually how they discovered it hadn’t eaten anyone, as it was already dead and thus they learned the truth. While all this was going on ashin was looking into the resurrection plan as a way to heal her dying mother and thus this sets up a lot of pieces that come to be prevalent in the series.
Early on the plot and tribes are a bit hard to follow but at the heart of this is ashin’s driving quest for revenge and to murder all those who destroyed her village and people. It becomes clear that she lives with this and will live with it forever, as when she returns to her village she imagines her family there but what we see is simply a group of the undead waiting to feast, bringing them back is how she knows that the resurrection plan works and why she’s so confident later on that she can build an army of the undead. As a child ashin unwillingly seeks help from the very man who betrayed her father and made it so that her home was destroyed. 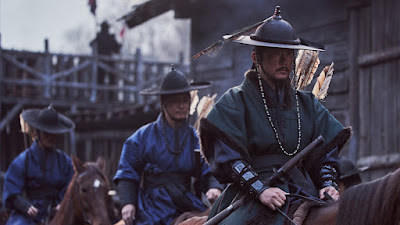 You will likely know of the Cho Clan from the first two seasons of the show and i love how this family is pretty much the bad guys throughout the entire series. It ties this all together and I think, it actually offers a way out for the good guys in the main show. They, of course, were against the Cho Clan 2, and thus moving forward there is potential that we see them let bygones be bygones because of the defeat of the chose.
I will talk about that later on though and as a teen ashin started to be trained so that one day she could get revenge and she began doing jobs for the commanders, this involved spying on the pajeowi and this is where she discovered her father. After having his legs and arms amputated, he was labeled as a traitor and forced to live a life of constant pain as their prisoner. Ashin’s father wanted death and she ended up obliging this and burning the entire location to the ground, now because of this ashin wants answers and this is where the need for revenge is further fueled. After discovering specific scrolls that detail how her father was framed in order to avert a war, she decides to kill all who had a hand in destroying her family and village. She returns to her base and that knight is visited by a soldier who abused her, she kills him and turns him into the undead before unleashing him on the camp.
From the rooftop, she picks off any survivors and you have to hand it to her, she’s one of the deadliest if not the deadliest combatant in the entire show so far. Using the last soldier as bait, she draws the zombies together and wipes them all out with fire, leaving the entire army destroyed. 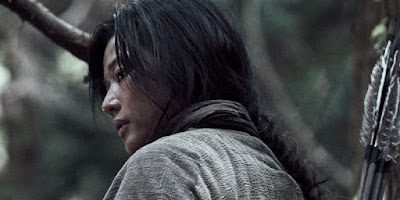 Ashin takes what initially appears to be a sack back to her village but it’s revealed to be the commander and they feast on him while he’s alive. For years they had existed because she brought them livestock but now they have something better, human food which he thinks they will enjoy even more. She promises to provide them with only delicious meals from now on and from here we watch as a sort of montage plays out which involves selling the resurrection plant. This would, of course, lead to the events that we saw play out in the first and second season and it starts to sell the seeds of where everything went wrong.
At this point, ashin has kind of went off the deep end and we learned that she wishes to kill every living thing in Joseon and Georgian and then join the undead after her mission is complete.
The special ends with ashin coming face to face with a cardigan and his group of soldiers, she notches an arrow up and they outnumber her she fires it at him, no doubt killing him in the process. She is, of course, an expert with a bow and arrow and the rest of the group would have to ride towards her, so she might have even killed them before they managed to reach her. 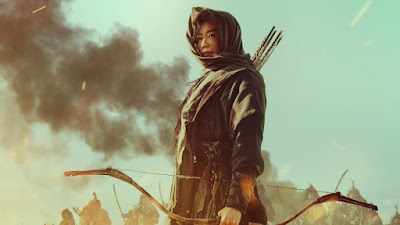 Although her revenge is complete, she still wishes to murder people and the second season of course ended up with her coming face to face with the central cast. When we left, then they were traveling to find out where the reincarnation plant was coming from and they discovered a number of the undead in chains. We, now know that these are part of her village and I really can’t wait to see how season three starts off.
I think with the way things are left that the two sides will be opposites to one another but I do hope that the animosity is pushed to the side in some way, however, due to ashin’s psychosis and the way that she views her villages is still being alive, she could be propped up as a major villain that will be the big bad of the third season.  Ashing could easily let the chains loose and thus swarm everyone and this would allow her to escape.
One of the big questions hanging over the finale was, how was the resurrection plan still spreading and it’s clear that she was the cause of this, so I am not sure if a quest for revenge will stop anytime soon. I really like ashin, I would love for her to get some redemption but I also feel that it may be impossible at this point, due to what’s happened. Kingdom as a whole was very much about the class struggle and ashin very much represents the uprising of the poor. According to me, the show was very much playing on the phrase ‘eat the rich’ which was coined by John Jacques Rousseau. In full, he said when the poor have nothing left to eat, they’ll eat the rich and yes, that’s basically what kingdom is for me. I kind of think that ashin might even come out on top and potentially, she could kill every character and she says go off and join her village, that would be an incredible ending to me and very dark and although I do want to see the good guys win, I want to see ashin win as well.
Interestingly, kingdom 2 had a seven-year time jump in which we saw a new prince rising up that was immune to the infection, and thus it is possible that ashin sees him as a way to rescue her people. There isn’t really a way to bring them back at this point but maybe she becomes fixated on this and even tries to kidnap the boy so she can study him. Another possibility is that she actually missed with the arrow, as we did see, I’d again dodging them like it was the matrix. Perhaps, she is still out to kill them and that’s why she’s had this grudge for so long and he could be propped up as the next big bad that they have to join forces to fight.
I know I’m kind of caping a lot for ashin at the moment and hoping that she’s good but who knows there is still hope there, however, the realistic side of me says that she’s gonna be the bad guy. Kind of hoping she is because she’s an awesome character and I can’t wait to go back and re-watch everything from the start. 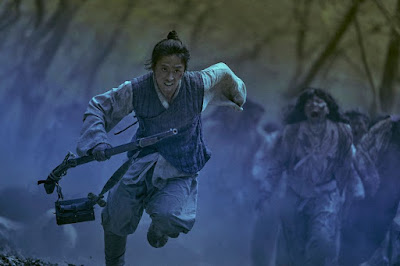 As for my thoughts, I have to say, I really enjoyed it and so far the show has had three great releases. I probably, would rank this slightly below the two seasons but it’s still an incredible entry and I am glad we get to see some things from ashin’s side so we can understand her motives. It’s gonna add such an interesting dynamic to the show and we have two sides that we can root for, instead of just being focused on the one.
According to me, that’s really good storytelling and also character development, I think the show yup, excels at everything it tries. It’s got so many things going on with it and adding this string to their bow has made the series one of the best zombie properties out there, It’s excellent too.
As a period piece it just manages to capture things so well, it leads to kingdom action of the north being an incredible special laced with political metaphors, amazing acting, and also action scenes. Hopefully, the third season of the kingdom isn’t too far away as this has got me hungry for more and it gets a 9 out of 10.
August 1, 2021
0 8 minutes read
Facebook Twitter Pinterest WhatsApp Telegram
Share
Facebook Twitter LinkedIn Tumblr Pinterest Reddit WhatsApp Telegram Share via Email Print